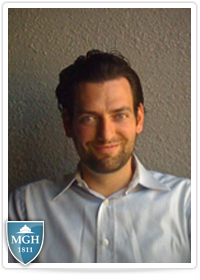 Ryan is the Systems Manager within our lab at the Massachusetts General Hospital.
His research in simulation began in 1998 when he worked with the Medical Applications Group under Dwight Meglan, PhD at Mitsubishi Electric Research Laboratories (MERL) on the first real-time Interventional Cardiology Training System (ICTS). Early in 2002, Ryan joined two of his colleagues from MERL at the newly established Simulation Group at CIMIT to work on the VIRGIL chest trauma simulator for the military. Ryan was the lead investigator on the COMETS autonomous casualty simulator which was licensed by CAE in 2009 and is now being sold as the CAESAR trauma mannequin.

He is the founder of Design for Complex Systems, a firm that provides design and engineering services for early-stage, advanced prototypes. Through DFCS, Ryan has worked across a broad range of fields ranging from pharmacodynamic simulation, to knowledge management, to lightweight communications, to digital storytelling, and surgical robotics. DFCS has also been contributed to several commercial simulation systems including Mentice, SimQuest, and Novint. DFCS is located in Jamaica Plain, MA.

Ryan received his degree in Industrial Design from the Rhode Island School of Design in 1998 and attended RISD's European Honors Program. He lives in Jamaica Plain with his wife and two fine sons.