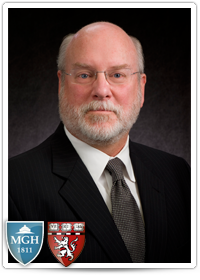 In 1994, Dr. Dawson became interested in the possibilities for procedural medical training through hybrid computer-based simulation. Since that time, he has concentrated his research efforts in this area as leader of The SimGroup, a research group at the Massachusetts General Hospital. An editorial accompanying the first description of their simulator for interventional cardiology training, developed as a collaboration with the Mitsubishi Electronics Laboratory, described the results as “a breakthrough of astonishing and revolutionary importance” [December 2000, Catheterization and Cardiovascular Interventions]. The commercial version of this system, called VIST (Mentice AB, Gothenburg, Sweden), has trained more than 30,000 physicians worldwide. More recently, the Group’s long-term research project to create the first autonomous, physiologically-based simulator, the Combat Medic Training System (COMETS), was licensed to CAE Healthcare and is now being sold worldwide as the Caesar Trauma Mannequin Simulator.

The Group’s work has been selected for inclusion in the permanent collection of the National Museum of Health and Medicine in Washington, DC (2005) and has toured the Wellcome Collection in London, England (2008), the Deutsches Hygeine Museum, Dresden, Germany (2009) and the Canadian War Museum in Ottawa, Canada (2010- 2011). Dr. Dawson has received the Satava Award, the Edward M. Kennedy Award for Healthcare Innovation, and the prestigious Army’s Top Ten Greatest Inventions Award for his innovative work. He was selected to present at Boston’s IDEAS 2005 conference, which featured the 25 most innovative thinkers of New England, and in 2008 he was invited to speak at SciFoo 2008, an invitation-only meeting of the world’s 200 most innovative researchers, thinkers, and scientists from all disciplines, hosted by Google and Nature. Dr Dawson is the founder and Chair of the Advanced Initiatives in Medical Simulation, a 501 c 6 non-profit corporation. In that role, he co-authored H.R.855 and S. 616, bills before the United States House of Representatives and Senate, respectively, that are intended to provide federal support for medical simulation at all levels.

He continues to actively practice interventional radiology at MGH, where he is developing a standardized curriculum for simulation-based training of residents in highrisk procedures. He has trained hundreds of interventional fellows who now practice nationally and abroad. In collaboration with his colleague, Dr Peter Mueller, he has developed interventional devices that have been used on hundreds of thousands of patients worldwide.